When an inorganic glass is heated and applied to the heated surface of a metal, a portion of the metal's oxide diffuses into the glass forming a bond. If this bond remains during the cooling period to room temperature, the result is a glass-to-metal-seal.

When designing glass-to-metal-seals, both the glass and metal types are important considerations. If the coefficients of expansion are similar, as is the case with Kovar®-to-7052 glass, it's called a matched seal. When coefficients of expan­sion differ as they do with stainless steel-to-7740 PYREX®, the seal is called mismatched.

Both matched and mismatched seals have proven to be reliable. However, it should be noted that stress in each of the two types reacts differently to various environmental conditions. The best seal for a particular application will depend on the operating conditions. Larson Electronic Glass, LLC offers standard and custom seals suitable for a wide variety of applications.

Stresses in glass-to-metal-seals have been calculated and this information is available from the major glass companies. Glass properties change with heating and differential cooling of the glass and metal causing the stress calculations to be modified. These calculations should be considered as guide­lines. Excessive stress is best detected by a trained technician using a polariscope.

An important consideration in the design of a seal is how it will be connected to other components. Heat, often gener­ated in this process, can induce stress into the glass-to-metal transition. Excessive stress can cause the seal to fracture.

The most common method for joining the metal end of a seal to a flange or other mating part is TIG welding. The weld must be designed to minimize heat during welding. The through weld is recommended for this application. The flange is machined through to fit the diameter of the seal. The seal should fit into the flange with ease. If the fit is tight the pressure will induce stress into the seal. This is especially true if the metal is out of round. If the fit is too loose, the seal may not be perpendicular to the flange upon completion of the weld. 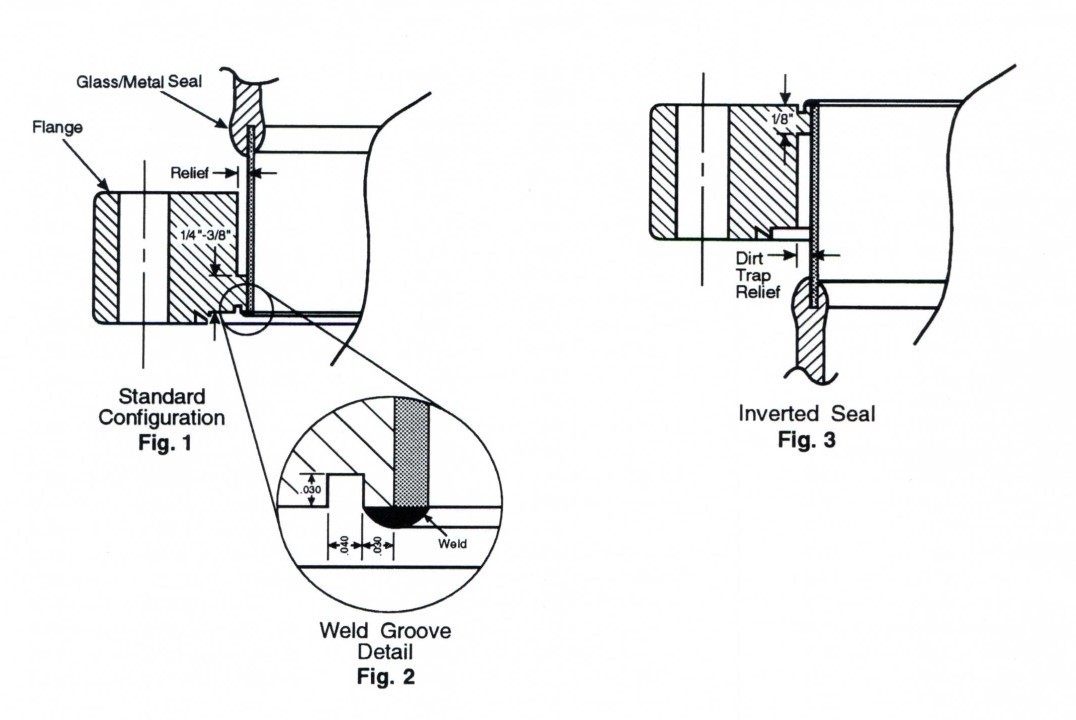 When the seal is inverted in the flange, the relief in the bore should be opened up to eliminate most of the dirt trap created by welding on the atmosphere side. The 1/4" to 3/8" dimension can be shortened to 1/8" but alignment will be more difficult (Fig. 3).

The weld is made with three tacks - continuing the third tack around the entire circumference. The operator should not stop to fix holes. They should be repaired with another complete pass. The main concern is to keep the heat on the seal even. More than two passes is not recommended when welding Kovar®-to-stainless steel because cracks will develop in the Kovar® near the weld.

Many applications require that the metal length be shorter than standard. These seals should be welded with either a laser or an electron beam welder which concentrates the heat at the weld. Another approach is to make the weld prior to the glassing process.

When performing brazing or soldering glass-to-metal-seals it is important to maintain even heat around the seal. If a torch is used, the seal should not be directly heated. The heat is applied to the mating part and allowed to conduct through it to the seal. If there is a leak, the entire piece must be reheated. Allow the part to cool in open air.

Mechanical seals should not be tightened to the point where the metal end is distorted causing the glass to crack. The connection should be made as far from the glass as possible.

Connections are also made to the glass end of tubular seals. The welding, or sealing as it is called in the glass industry, is quite a different process. Again, attention is focused on the transition. When sealing glass to a stainless steel-to-glass-seal it is recommended that the glassblower work as far from the transition as possible. Glass is a poor conductor so three to four inches is generally sufficient. The splash of the flame must be directed away from the transition during sealing and when torch annealing. An experienced glassblower can actually reheat the entire seal and work at or close to the transition. However, this requires a high degree of skill.

Kovar® seals can be heated to the point where the metal shows color without failing. But, as is the case with any glassworking, heating up and cooling down must be done slowly.